Have you ever wanted to just pronounce the song's name and let a Discord bot play it?

Today we will make our own "Alexa" for Discord.

Why Terminator? It seems to be the most consistently detected hotword.

Why Mozart? It's not copyrighted.

You can find the native module code in Vagr9K/native-voice-command-detector.

The actual discord bot that utilizes this is located in Vagr9K/VoiceBot.

First of all, let's break down the idea into smaller pieces.

There are effectively two main parts of our application:

This might initially seem strange since the voice command detection code is technically a submodule of the main code, but due to its complexity, it's worth to split the problem into these pieces.

The main code gets easily handled by a NodeJS based application.

Libraries like discord.js and ytdl provide easy to use tooling to solve most of our problems. Add TypeScript on top to get static typing, compile time checks and very convenient autocomplete based on the definitions of the aforementioned modules, and you're set.

The npm ecosystem greatly decreases the development time, while also lowering the entry bar for people with small programming experience, making it perfect for the audience of Discord.

From the performance perspective, these tasks aren't CPU intensive and mostly wait for the network, meaning that the NodeJS event loop can handle them effectively without any extra optimizations being needed.

The naive implementation would consist of us piping the entire audio stream into a speech to text service and parsing the text. Due to privacy concerns and pricing of these services, that's not ethically/economically practical.

It's reasonable to expect that voice commands will be less than 1% of the audio stream data, making the so called "hotword detection" a huge improvement in both regards. After we've detected the hotword we only need to send a chunk of audio data for speech to text and later command extraction.

Keep in mind that the data that we will be receiving is a stream, meaning that after a hotword is detected we will have to redirect the next X seconds of data into a buffer, that will be later sent to a speech recognition service.

It's also worth noting that if a user pronounces another hotword while the previous one was being buffered, we need to create a new buffer for the new command and submit the old one for processing.

This gives us the general logic of the application (data flow is from top to bottom): 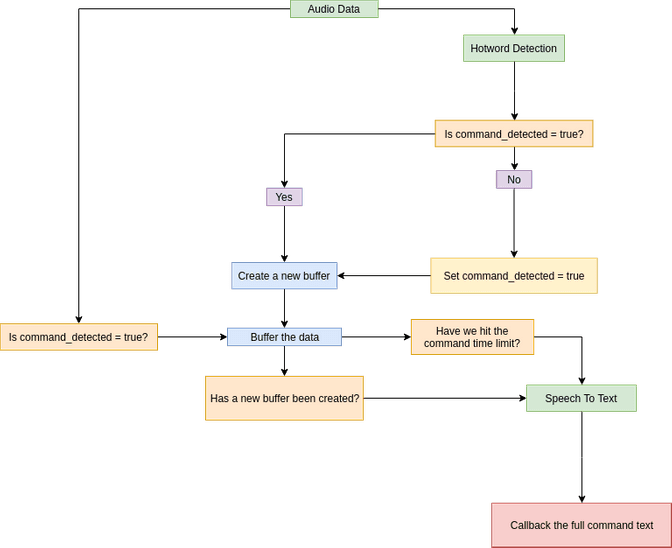 For Hotword detection, the Porcupine seems to be the best bet. This is due to:

Ideally, Precise would've been used, but it's Python only making things complicated, since it can't be as easily ported to NodeJS.

It's really hard to compare the speech to text services, but judging by the pricing and general feedback, the GCloud Speech To Text is a safe choice.

First of all, we receive the audio data from Discord as RAW Opus frames. Opus is a highly optimized audio codec that manages to provide high quality audio even at the lowest bitrates, making it optimal for network based voice communication.

Since the supported format for Porcupine is the signed 16 bit low endian PCM (single channel, 16K frequency), we need to first decode the data. GCloud in its own turn supports S16LE, but due to network payload size concerns, it makes sense to first compress the data via encoding. As we've established before, Opus provides the best size/quality and is supported as OggOpus on GCloud. The encoded audio data will also need to be Base64 encoded and sent as a JSON payload by a POST request. 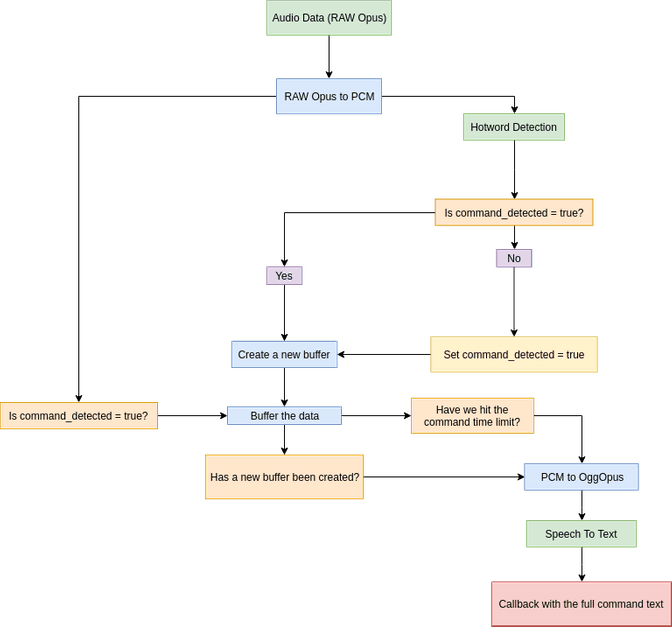 Since the logical segment is done, we need to dive into the architecture.

First of all, let's break down our app to concurrent tasks to see which actions can be parallelized (notice the green rectangles): 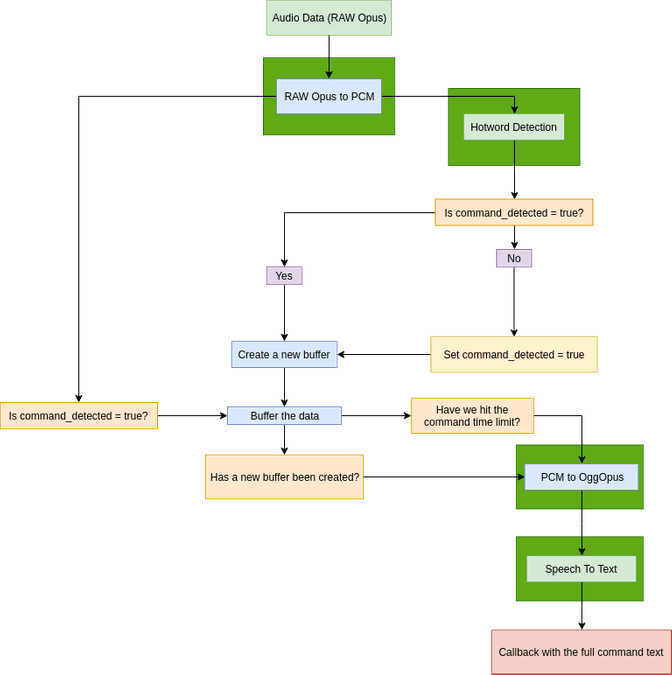 This gives us a good idea over which tasks can be assigned to worker threads. The issue is that we're dealing with streams. Processing the buffers only when a new frame enters the module is problematic, since a user may pronounce his command and stay silent for the rest of the command's time limit, effectively hanging the system.

This means that our logic processing needs to be handled on periodic intervals by a separate lightweight thread, while worker threads execute the CPU intensive code.

This brings us to the final design: 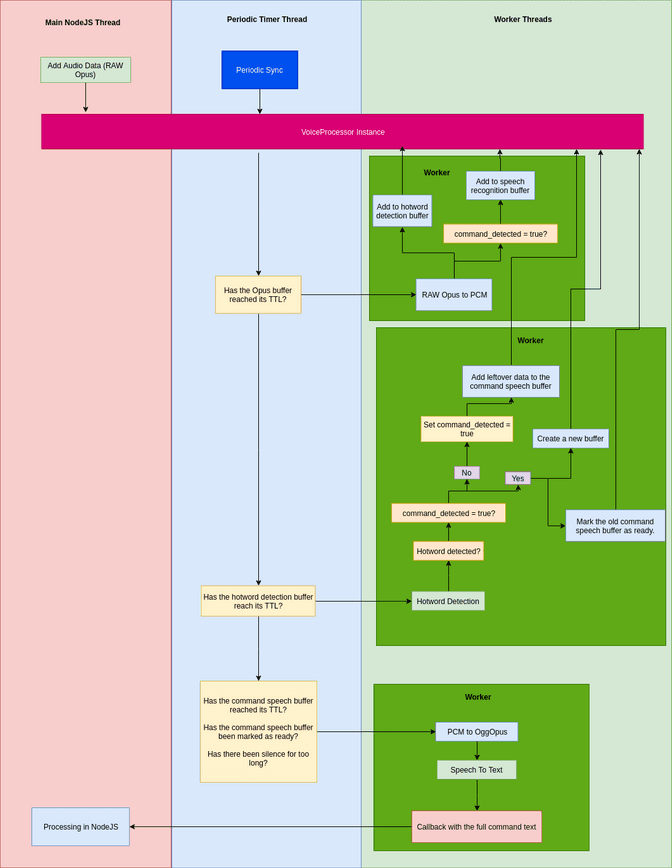 The VoiceProcessor instance holds all the buffers and their states. Each audio stream (Discord user) gets his own instance.

The main NodeJS thread which originally invokes the native code is only used for submitting the Opus frames to the VoiceProcessor instance buffer. No processing is done during the submission, which keeps the event loop blocked for the minimal amount of time.

The periodic timer thread periodically calls the Sync function on each VoiceProcessor instance to perform the state processing on them. This ensures consistent latency irrelevant of the Opus frame submission rate. The main NodeJS thread is also unloaded and doesn't have to perform these actions.

Based on the timers and buffer states of the VoiceProcessor, Opus decoding, hotword detection and speech recognition are being invoked in separate worker threads to ensure maximum possible parallelization of work on all the available logical CPU cores.

The benchmark was executed as follows: 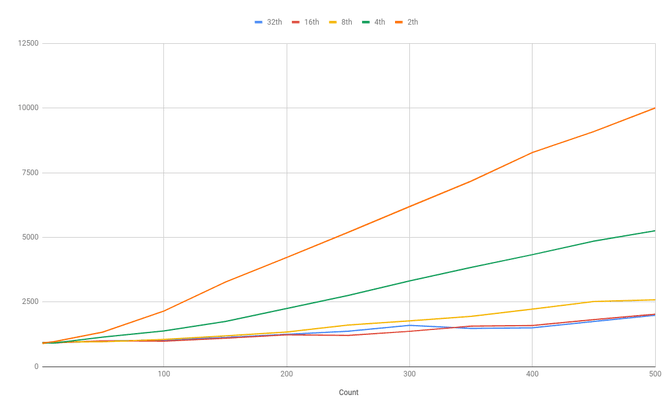 As expected, 32 worker threads on a 16 logical core system perform the same as 16 workers.

There is a linear scaling with the worker count from 2 to 4, and from 4 to 8 workers.

Jumping from 8 workers to 16 provides ~23% performance improvement, which is in line with the general expectations from AMD's SMT implementation.

Overall, the nature of the task allowed proper parallelization to be implemented. This is close to a best case scenario when it comes to multithreading.

It's also worth noting that Discord enforces sharding after your bot connects to 2500 servers. From my observations, it's highly unlikely that more than 100 people will be concurrently talking on those 2500 servers. As you can see from the <100 concurrent user tests, we have enough performance to run each shard's instance on a dual core CPU without any issues (ignoring NodeJS's own processing needs).

Voice command detection, even in its simplest form, is far from being easy. There are a lot of edge cases to consider and performance metrics to keep track of.

As of right now this is still an alpha stage project, but it shows that using N-API to handle the performance critical segments while keeping the simplicity of NodeJS for the rest of the project, effectively combines the best of both worlds.

This has been my "weekend project" for quite a while. If you think I've missed something, feel free to point it out.